Confirmation Bias: How To Get Out of The Echo Chamber

Confirmation Bias: How To Get Out of The Echo Chamber

Feel like sharing your political views on Facebook isn’t doing any good? According to science, you’re probably right

On Capitol Hill:
January 2015 – July 2017
48% of links to articles by left and right-leaning U.S. news outlets shared by Congress members were mainly linked to by members of their party
Posts by Congress members to Facebook before and after Trump’s inauguration by party

Across the Internet:
25% of social media users follow political candidates and figures online
News stories from most liberal and conservative outlets were shared 21% to 22% more than less biased news sources

The Role of Internet Giants and Information

Google flags fact-checked information and punishes unsubstantiated news sources
Facebook’s data collection is under fire due to the creation of AI-run neural network profiles of users and manipulating them
Prevalence of echo chambers and filter bubbles
Filter bubble
Algorithmic personalization of search results and news based on search history, site visits, online shopping habits, and social media use

Echo chamber
Homogenous clusters of info which dictate what we see online based on shares, likes, ads, and friends

Famous Studies
1975 Stanford suicide note legitimacy study
Two groups were given 25 suicide notes and asked to report which were real and which were fake
Psychologists gave one group a fake high score and the other a fake low score
Even after it was revealed that their scores were faked,
High scorers still believed they performed better than average test-takers
Low scorers still believed they performed worse than average test-takers

We can never be fully rid of confirmation bias, but there are things we can do to curb its effect on our thoughts, words, and actions

How To Avoid Confirmation Bias

Don’t remove friends with opposing views
After the 2016 election, 13% of Americans blocked, unfriended, or unfollowed a friend on social media due to political posts

Use good research skills
Take free online or local courses on news literacy
Don’t share a viral story without verifying it
Crosscheck multiple sources and use fact-checking sites such as Snopes, Politifact, and FactCheck.com
Get news as directly as possible
Retrace the way news moves to get to you on social media
Don’t trust social media to deliver reliable news 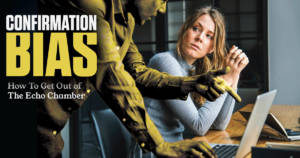